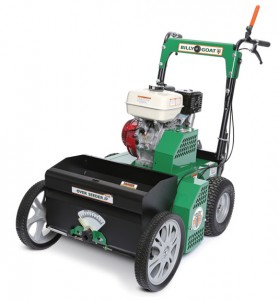 With its large seed box and hydrostatic drive, the OS900 Series has been a favorite of landscapers looking to save time on overseeding. The updated OS901 might not look much different from its predecessor, but it has some new features that make this overseeder easier to use and more effective than ever before.

The OS901 has an 11 blade slicing reel that’s 22 inches wide. As the machine drops seed, these blades cut thin slots in the surface of the soil to increase seed to soil contact. Billy Goat redesigned the reel blades to improve slicing performance, reduce thatch pickup and increase its service life. The reel connects to the engine with a dual belt drive to improve reliability. Since this drive system is built into the side of the overseeder, it’s easy to service. Joints at the front axle and handle base give the unit two points of articulation. This lets the slicing reel float over the contours of the soil for a consistent cut depth.

While the new blades might not be noticeable until you use this overseeder, it’s easy to see a major change at the back of this machine. In addition to a lever-based height adjuster, there’s now a foot-actuated adjuster. This lets you lower and raise the reel quickly when moving across pavement and landscape features. Wish you had this feature on your OS900? Billy Goat offers a conversion kit to add the pedal to older models.

The reel height has an infinite adjustment range to spread out wear over the blades for a longer service life. The maximum cutting depth is 0.125 inches, plus an extra ½ inch of adjustment to compensate for blade wear. A hand-adjusted knob lets you set a precise depth limit, so you always get the same cut when you drop the blades with the foot lever.

Hydrostatic Drive to Take the Effort Out of Seeding

To help the blades penetrate the soil, both versions of the OS901 weigh over 300 lbs. To compensate for this, the 901 uses a hydrostatic drive system from Tuff Torq. Squeeze the lever on top of the left handle, and the drive engages, moving the overseeder along at a comfortable walking speed. Since it isn’t geared, you can dial in just the right speed for the terrain, whether you’re on flat ground or hills.

Eliminating the Complexity and Common Problems with Overseeding

Seed is held in a 30 lb. open box. With or without the optional clear cover, it’s easy to see the inside from the operator’s position, so you know when you need to stop for a refill. This box is mounted high to prevent dew and moisture from making the seeds stick together.

Drop rate is set using a lever on the front of the box. An application chart on the panel between the operator handles tells you everything you need to know to set depth and drop rate. The auto drop system turns seed dropping on and off with reel engagement. That way, it doesn’t dump seed on the ground when starting and stopping, and there’s no spreading seed during transport. The agitator is built into the front axle, eliminating the need for belts or friction drive systems. When you’re done, the handles fold down without using screws.

Billy Goat makes two versions of the OS901 overseeder. The only difference between them is their engines.

The OS901SPH uses Honda’s GX270. If you own any other professional equipment, you probably have at least one of these engines already, and for good reason. Over the years, this single-cylinder has built a reputation for unfailing reliability.

Before Subaru shut down their small engine division, Billy Goat built the EX27-powered OS901SPS. It’s 9 lbs. lighter than the Honda-powered model, and the engine has a similar reputation for reliability. While Subaru Industrial may be closed, they still honor warranties and offer replacement parts.

Get Everything You Need for Your Billy Goat from One Place

Billy Goat Parts isn’t just an online parts warehouse. We’re a certified dealer for Billy Goat, Tuff Torq and Honda. That means you can get OEM parts and accessories to fix and upgrade everything on your equipment. Have a Subaru engine? We still provide the parts you need to keep it running. Visit us at www.billygoatparts.com. We ship across the United States and Canada.