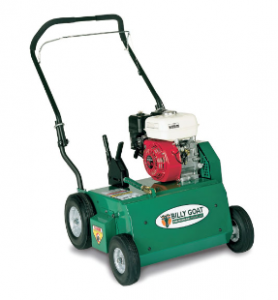 Thatch is one of the most overlooked and misunderstood parts of a lawn. This layer of soil covering vegetation can be helpful in small amounts, but it can cause serious problems for grass if it gets too thick. Here’s what you need to know to identify thatch problems, get the best results using your Billy Goat power rake and keep thatch from building up again.

What is Thatch, and Why is it Bad?

Dead plant matter gathers on the surface of the soil creating a layer of organic material called thatch. A thin layer of thatch can be beneficial, particularly during the summer as it creates a barrier that holds in moisture. However, if it’s more than a half inch thick, it can keep moisture, fertilizer, and air from reaching the soil. If that thick layer of thatch gets wet, it can promote the growth of molds and become a home to pests. If it’s left on the ground for too long, the grass roots will grow into the thatch, leading to a shallow root system that won’t be able to weather droughts and freezes.

There are four main reasons thatch can gather in thick layers on your lawn:

– Overfertilizing, particularly if it adds excess nitrogen
– Consistently mowing too high
– Oversaturated soil caused by heavy rains or overwatering
– Compacted or heavy clay soil that makes it difficult for decomposing plant matter to be absorbed

Stem-heavy grasses including warm season varieties like St. Augustine, Bermuda and Zoysia and cool season grasses like bentgrass and Kentucky bluegrass varieties with form thatch faster than other grasses. Mulched grass clippings decompose quickly and won’t lead to thatch buildup; in most cases, it will reduce thatch by making the root system and soil surface healthier so that harder materials can be digested more quickly.

What’s the Difference Between Aerating and Dethatching?

These terms are sometimes used interchangeably, but they’re completely different processes. Dethatching lifts thatch away from the surface of the soil while aerating punches holes in the soil to relieve compaction. Aerating will remove thatch with the soil plug, but it’s not a replacement for dethatching.

Preparing the Lawn for Dethatching

Before dethatching, mow the grass to half of its normal height to let the blades of the dethatcher reach through the thatch more easily. The lawn should be dethatched when the soil is slightly moist to help with blade penetration, either after a light rain or with some watering.

Flag hidden obstacles like irrigation heads to keep from running over them with the power rake. If you have a PR550 power rake, it can be fitted with a spring tine reel that will lift thatch without damaging objects you may run over.

Have a plan for removing the thatch once it has been lifted from the soil: depending on the size of the lawn and the thickness of the thatch, there could be several truckloads of material that will need to be dealt with. It can be decomposed into mulch or compost on site or at a green waste treatment facility.

The blades of your dethatcher need to be set to the right width for your grass: one to two inches of space between the blades is ideal for warm weather grasses, while three inches work best with less dense cold season grasses. Blade depth should be set so that the thatch is pulled up while digging no more than ½ inch into the soil.

For the best results, make two passes across the lawn, running the second pass at a 90-degree angle from the first. This criss-cross pattern will lift as much thatch as possible while limiting root damage.

Once the thatch has been lifted, it can be gathered for disposal with the same methods used for removing fall leaves, whether that means pulling it onto a tarp with a leaf rake or using a lawn vacuum.

All that pulling and movement from the blades will make the turf look awful at first, but after two or three weeks of recovery, it will grow back to create a much thicker lawn. In the meantime, there are some things you can do to help it bounce back:

– Overseed over any bare patches.

– Apply fertilizer. If it’s almost time for seasonal fertilizing, wait until after dethatching to fertilize.

– A dethatched lawn isn’t just good for grass, it’s also good for weeds. If you dethatched in the spring, apply a pre-emergent herbicide to halt the spread of crabgrass.

Get Parts for Your Billy Goat Dethatcher

www.billygoatparts.com is a certified dealer for Billy Goat and the engines that power their equipment so we can ship any parts or accessory you need for your dethatcher to any address in the U.S. and Canada. Not sure exactly what you need? Our site has built in factory parts diagrams and descriptions to help you identify the right replacement.