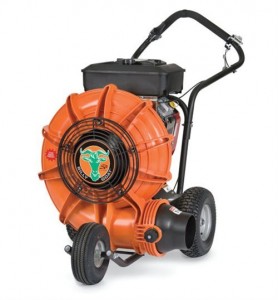 Billy Goat’s line of ForceTM Wheeled Blowers consists of four standalone blowers and one blower designed to be mounted on a lawn tractor. The F6 is the smallest and lightest in the ForceTM line; it is designed for smaller properties including typical residential lots. The F9 is a slightly more powerful standalone blower designed for commercial properties or larger residential applications.

Commercial users will select one of the three other models. The F13 is a significantly more powerful standalone blower designed for clearing large commercial properties or for municipal applications including golf courses and schools. The F18 is the most powerful standalone blower offered by Billy Goat, generating an air velocity of 200 miles per hour. The FZ1300H is the vehicle-mounted blower; it will fit any zero-turn mower with the standard JRCO mount.

Billy Goat’s DL-Series of debris loaders consists of six separate models. The DL12 and DL13 are the two entry-level models, suitable for lighter or less dense loads; the 13-horsepower DL13 is rated for 2,100 cubic feet per minute of airflow while the 12-horsepower DL12 is rated for slightly less. The DL14 and DL18 mid-range models have a slightly larger impeller, a slightly larger hose, and more powerful engines; both the DL14 and DL18 can move 3,700 cubic feet per minute of air.

The DL-Series has numerous features that make it easier to process and load foliage and other types of debris. The standard onboard shredders include replaceable stainless steel liners with serrated blades for fine shredding and high levels of durability. A clear urethane hose also allows operators to easily determine the presence of obstructions.

The DL-Series loaders also come with multiple options for mounting the unit securely on a vehicle. The loaders come with skid mounts for mounting to a truck bed. A tailgate hanger kit is also available which allows the unity to hang off the truck’s tailgate. A hitch attachment is also available which mounts to a conventional trailer hitch on the rear of a pickup truck and allows the unit to move at the operator’s discretion.

Relative to conventional debris-clearing options, DL-Series loaders offer customers a number of benefits. Improved productivity results from not only the ease of clearing the debris, but also the ease of shredding or compacting it. The integrated shredders eliminate the need to expend manual labor to grind the material down finely, bring along any other equipment, or tolerate an inefficient space allocation in the truck. Intact leaves and foliage occupy a disproportionate amount of space relative to particulates and granulated material, resulting in expensive added trips to waste disposal sites.

For users with more modest debris-clearing demands, Billy Goat offers five different lines of wheeled leaf and litter vacuums: the KV-Series, the TKV650SPH, the QV-Series, the VQ-Series, and the LB352. The KV-Series consists of a multitude of vacuums with an array of different engine options and intakes that are 27 inches wide; they are designed for light commercial or residential use on a multitude of surfaces. The TKV650SPH is the only mower in the TKV line; it is similar to the standard KV-Series except for the fact that the TKV650SPH also possesses a standard onboard chipper.

The MV-Series of vacuums have 29-inch intakes and include push and self-propelled models; they are designed for conventional commercial applications on a multitude of surfaces. The QV QUIETVACTM vacuums have an intake that is 33 inches wide and are designed for industrial applications; they are the quietest vacuums in their class, generating only 77 decibels of noise at full RPM. The VQ-Series is similar to the QV-Series; it lacks some of the noise reduction features and the cyclonic filtration technology, but has 75-gallon top-loaded bag, which is nearly twice the size of the VQ’s bag. The LB352 is a lightweight and light-duty vacuum designed for international use.

The exact features vary by model, but each line contains self propelled models for reduced operator fatigue and multiple engine options. The TKV-Series is equipped with an onboard chipper, finely cutting branches to make efficient use of its 40-gallon bag. The KV and TKV-Series also include standard dust skirts. The MV-Series includes one model, the MV600SPE, that is available with electric starting. The QV-Series offers a cyclonic filtration system and an optional dust sock as well as a hydrostatic drive system with an adjustable speed between zero and three miles per hour. The KV, TKV, MV and VQ-Series all include standard steel impellers with serrated edges.

These vacuums present several benefits over conventional methods of gathering debris. The tasks of collecting and bagging are automated and consolidated into one ergonomic system. This allows owners to clear significantly more terrain more quickly and with less fatigue on the machine’s operator. With the wood chipper available on the TKV650SPH, owners can also dispose of dead tree branches and smaller tree trunks on their property without having to rent or purchase a large and cumbersome standalone wood chipper.

Billy Goat vacuums are simple to maintain. Whether you are changing the oil, replacing a worn impeller, or replacing a malfunctioning component, BillyGoatParts.com has a full selection of OEM components and maintenance tools to fit any Billy Goat vacuum. They also sell numerous optional accessories that will fit the vacuums and tailor them to any specific application.