Fuel and Your Billy Goat Equipment 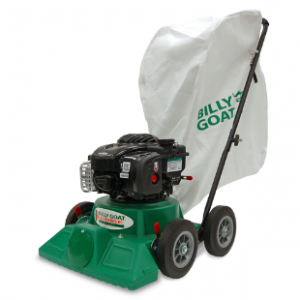 Today, gasoline is formulated for modern automobile engines, and those engines have less and less in common with small engines. This is causing a range of problems in outdoor equipment including corrosion and varnishing that can keep the engine from running.

Ethanol contains dissolved oxygen, and it’s hygroscopic, so it absorbs water over time. This leads to acid formation that can cause corrosion. That’s not a problem in regularly used engines, but most small engines are only used seasonally, and some Billy Goat equipment including dethatchers and debris loaders only see use during a few weeks out of the year. If ethanol is left in the fuel tank, the corrosion can damage the carburetor and ruin the jets. This has lead owners to associating all fuel problems with ethanol, but simply switching to “pure gas” isn’t enough.

If you use fuel that doesn’t contain ethanol, you’ll avoid corrosion. Unfortunately, it sets up a whole new set of problems. Since ethanol is a solvent, it slows down the formation of gums and varnish. Standard gasoline doesn’t have anything in it that does the same job, it ages quickly, leaving a sticky mess that clogs the carburetor jets and fuel lines. In the end, the engine will have the same problems, but from a different source.

Choosing between gas with or without ethanol doesn’t matter nearly as much as handling that fuel correctly. Always start with fresh gasoline. Untreated fuel can be used up to one month from purchase if stored correctly.

If you aren’t certain that the gas will be used within one month, mix it with a stabilizer as soon as you buy it. This will slow down degradation, but it won’t stop it. Honda and Subaru recommend draining stabilized fuel from the engine if it’s over three months old, while Briggs & Stratton says their engines can be stored with stabilized fuel for up to 24 months. If you’re adding stabilized fuel before storing your equipment, let your engine run 5-10 minutes to pull it through the fuel system. Unlike other manufacturers, Briggs & Stratton gives the same recommendations for their fuel-injected engines, including the Vanguard EFI used in the DL3700V loader.

Do what you can to reduce contact between fuel, air, and water. Keeping fuel cans and tanks full and sealed will prevent moisture from collecting inside the tank and reduces air contact, slowing oxidation.

Identifying and Dealing with Stale Fuel

All fuel should be used or drained before it goes stale. Before putting the equipment in storage, drain the fuel tank and run the engine to remove any gasoline left in the carburetor. If you have some gasoline you’re not sure about, pour a little into a clear glass and compare it with some fresh fuel. If the stored fuel is noticeably darker, it’s stale.

Most Honda engines have a drain plug on the base of the carburetor, while fuel systems on other engines can usually be drained by disconnecting the fuel line from the carburetor. It may be easier to use a siphon pump to drain the tank if the engine is mounted in a hard-to-reach area. Keep in mind that there will still be stale fuel in the fuel line and carburetor. Start the engine and let it run until it stalls to remove the last of this gasoline.

Stale gas can be safely added to your car’s fuel tank. It will be diluted by the fresh fuel already inside the tank, and the fuel injectors are less sensitive to stale fuel so it will burn safely.

All the Parts You Need are Just a Few Clicks Away

Whether you need to buy a new belt or rebuild a carburetor, you can get everything you need for your Billy Goat from www.billygoatparts.com. We’re not just a Billy Goat dealer, we’re a dealer for all of their manufacturing partners including Honda and Vanguard, so we carry the parts you need to fix the engines that power your equipment. Our search engine lets you match up part numbers with exploded diagrams so you can find anything from the small seals to major components. We ship to both the U.S. and Canada.