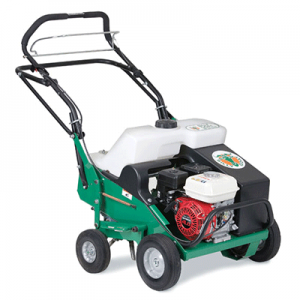 Dethatching and aerating usually go hand-in-hand to prepare lawns for seeding, but they can also help deal with soil compaction and thatch buildup, helping keep your grass beautiful and healthy. Here’s what you need to know to get the most out of these lawn care procedures.

Thatch is a layer of organic material that builds up on the surface of soil. While mulched grass clippings usually decay quickly, harder plant pieces including nodes and roots can stay around long enough that they build up faster than they decompose. A thin layer of thatch can help protect root systems from cold weather and drought, but a thick layer can create an oxygen barrier when wet and can cause roots to grow up out of the soil, making them more susceptible to drought. Thick thatch can also let the wheels on your mower sink on hills, causing the deck to tilt and scalp the turf.
As a general rule, thatch works best if it’s less than a half inch thick and becomes a problem if it’s over an inch thick.

Serious problems with thatch buildup are the result of improper turf care. Acidic soils can reduce the number of microorganisms in the soil that can decompose plant matter, while aggressive fertilization and pesticide application leads grass to produce more roots and stems.

The thatch layer controls surface access to the root system, but it’s the soil itself that makes the biggest difference when it comes to water and mineral absorption. The soil will compact slowly over time, while new construction, heavy foot traffic or kids playing in your lawn can all accelerate this process. A compacted layer as thin as a quarter-inch can halt water penetration. Compacted soil doesn’t just limit access to the root system, it also reduces oxygen, making it harder for microorganisms to thrive and digest thatch.

Sod needs at least a year to fully integrate into the soil. If you try to aerate or dethatch before then, the sod will fall apart.

To help the blades and tines on these machines penetrate the soil, the grass should be cut to half its usual height and the ground should be moist. It’s also a good idea to mark sprinklers and other obstacles so you can avoid them when cutting through thatch and soil.

The blades on the power rake should be adjusted so that they penetrate the thatch and barely touch the soil. When moving it over turf, make sure each pass overlaps by an inch or two to ensure all the thatch is being lifted up. For the best results, go over the turf a second time at a 90-degree angle. This cross pattern will lift up the maximum amount of thatch.

Once the thatch is piled up on the top of the lawn, it needs to be swept up and disposed of. While raking will work, a lawn vacuum will make removal a lot faster.

For the best results, use core tines. These cut small plugs out of the soil, opening up the surface with minimal impaction. If you need a cleaner surface or want to save time, solid spikes will slightly compact the sides of the holes they make, but they won’t leave plugs. With either type of tines, the aerator should only make one pass over the ground.

Aerators are heavy so the tines push down into the soil instead of pushing the aerator up off of the ground. Towable Billy Goat models have water jugs that need to be filled and placed on top of the aerator to provide the weight needed for soil penetration. No matter what type of aerator you’re using, it’s a good idea to have a couple people on hand to help you move the equipment, whether you’re unloading it from a truck or attaching it to a tractor or mower.

Cores can be shredded by mowing them. This will quickly dull the blades, so they’ll need to be sharpened before you use the mower to cut grass.

Get Your Billy Goat Equipment Ready This Season

When you need parts for your power rake, aerator or anything else Billy Goat, visit billygoatparts.com. We can supply you with replacements for everything on your equipment because we’re a certified dealer for Billy Goat and a wide range of engine manufacturers including Honda and Briggs & Stratton. Finding the right part is easy thanks to built-in factory parts diagrams that let you see exactly what you’re ordering. We ship across the U.S. and Canada.