Why is EFI a Good Choice for Debris Loaders? 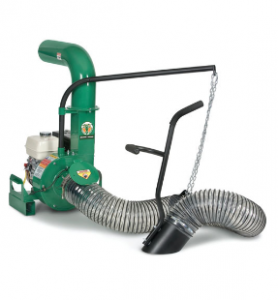 Carburetors may be simple, but they come with a lot of disadvantages. They need a lot of fuel, they’re temperamental, and they have problems with modern gasoline. That’s why Billy Goat chose to equip their DL37 debris loader with Vanguard’s Big Block EFI engine. If you’re looking for a high output debris loader, there are plenty of reasons why you should choose this fuel-injected model.

How Does it Work?

For the most part, Briggs & Stratton’s EFI system works like the one used in your car. In fact, it was co-developed with Delphi, one of the world’s largest automotive parts suppliers.

An electronic control unit (ECU) gets information from an engine speed sensor and a manifold absolute pressure (MAP) sensor. This tells the ECU exactly how fast the engine is running, and how much air is entering the engine.

A high-pressure fuel pump attached to the side of the engine pushes fuel into the injectors. The ECU activates the injectors to get the right amount of fuel to match the incoming air while maintaining engine RPM. During the exhaust cycle, an oxygen sensor tells the ECU how much fuel is being burned. This lets the computer make adjustments to keep the air/fuel ration balanced.

What are the Benefits of EFI?

For commercial lawn care businesses, fuel is the biggest operating cost next to labor. By delivering just the right amount of fuel at all times, EFI engines use about 25% less fuel than their carburetor-equipped counterparts. Using the onboard sensors, the ECU can lean out the fuel mixture under light loads without increasing engine temperatures, saving even more fuel on equipment that idles frequently, like a debris loader.

If you work in high altitudes, you don’t have to install a high altitude kit to get the engine to run. The ECU automatically trims fuel to match the incoming air.

Fuel injectors spray fuel to mix it with air, while carburetors depend on airflow to atomize and mix fuel into the air. In cold weather, this makes it much easier to start a fuel-injected engine.

By better matching the fuel mixture with operating conditions, an EFI engine can make more power. While peak horsepower is only a little higher, the torque curve is much wider than a carbureted engine. Since the ECU can react almost instantly to load changes, there’s also less throttle droop.

The added electronics also make engine problems easier to diagnose. Basic error information can be displayed using blink codes. In diagnosis mode, the “check engine” light blinks a number of times to indicate the error. For major repairs, a shop technician can use a scanner to get error codes from the ECU or hook it up to a computer to get a full readout of engine information, including fuel pressure and RPM.

Why is EFI the Right Choice for a Debris Loader?

The Vanguard EFI Big Block was designed with large mowers in mind, but it’s perfect for use in Billy Goat’s DL37:

EFI is better at burning stale fuel, which simplifies storage. Instead of draining the tank and running the engine until the carburetor is dry, this engine can be stored with fuel in the tank. Just add a fuel stabilizer, run the engine for 10-15 minutes, and top off the tank.

– Loaders see peak usage in the fall for leaf cleanup. An EFI engine is easier to start on cold autumn mornings.

The ECU automatically adjusts the fuel mixture, so there’s no choke to deal with. The engine always gets the exact amount of fuel it needs, making for easy starts whether the engine is warm or cold. This also takes the load off of the battery and starter, since it takes less cranking to get the engine going.

– Due to its size, a debris loader is one of the most demanding pieces of equipment that most landscapers will own. Better fuel economy can mean significant cost savings for the entire operation.

If You Have a Billy Goat, We Have the Parts and Accessories You Need

Billy Goat Parts is a certified Briggs & Stratton Vanguard dealer. That means we can supply you with parts for your equipment as well as the engines that power them. Need something simple, like spark plugs or an air filter? We have a section for commonly needed parts. Looking for other components? Our search engine can show you diagrams and parts descriptions from the factory for your specific model, taking the guesswork out of ordering. Visit us at www.billygoatparts.com. We can have your order delivered to any address in the U.S. or Canada.